This past week I received a call from a customer whose pool was empty, and safety cover was sitting at the bottom on her vinyl liner. After asking a couple of questions, it was obvious how the cover ended up where it did.

When she made the decision to purchase a safety cover (which is the best investment you can make for your pool in my opinion) she said after doing her research there was no way on earth she wasn’t going to buy a solid safety cover.  For those of you shopping for a  safety cover, there are basically two types; a solid cover, that doesn’t let water though, except for a panel of mesh that acts as a drain, and mesh safety covers, those that are entirely porous, and let through all the water.  She said she hated the idea of the mesh cover acting like a filter, letting fine silt through that will end up on the bottom of her pool when she opened it. She opted for the solid, because as she says, “I keep a meticulous pool” and she wanted it to be as clean as possible when she opened it. After talking with her for no more than five minutes, her response to what she thought of solid safety covers was pretty clear.  “Never again!”

Don’t get me wrong, any safety cover is a good investment, but opening and closing as many pools as I do, I have to say- Mesh is the way to go.  Why do I say this? Well let’s get back to the customer whose solid cover sits at the bottom of her pool. How did this happen you ask. Let me tell you.  Although the fact her cover sits on the bottom of her pool is not ideal, she does have other issues. At some point over the winter, her 15 year old liner failed (which is about what you can expect out of liners these days) draining almost all of the water from the pool. As the winter progressed, snow, ice wind etc battered the cover, which when still on, had no water underneath it. As the snow and ice built up on the cover, so did the weight, putting lots of pressure on the springs that attach it to the pool deck.  It is pretty likely that whatever drain system the cover had, was blocked with pine needles, leaves and other debris, causing water to pool on top of the cover rather than drain through into the pool. The weight became to much for the springs to overcome, causing them to fail, allowing the cover to fall in the pool.

Had this been a mesh safety cover, this never would of happened simply because water would not have pooled on top, and would stay attached as it was installed. This is just one example of why I highly recommend a mesh safety cover over a solid. Listed below are some bullet points of other reasons I feel mesh is the best. 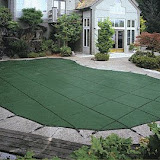 Now to be fair, there is a place for solid covers out there, or else they wouldn’t sell them, so here is some disadvantages, which I feel do not out way there advantages.

Overall we feel the benefits of owning a mesh cover far outweigh there disadvantages, and homeowners will be much happier, especially those who open and close their own pool. Either way however, owning any type of safety cover is a smart; if not the most important investment you can make for your pool.